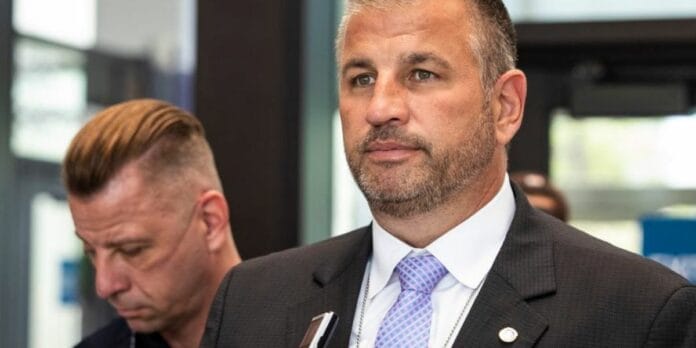 The dispute is between mayor Lori Lightfoot and police union head John Catanzara. The debate is polarised and is over vaccines on whether the government has the right to mandate them.

Mayor Lightfoot sought and received an order against Catanzara yesterday. The judge has issued a 10-day restraining order. This order bans Catanzara from making statements that encourage members not to report their vaccination status.

In reply to the same, the police union filed its own lawsuit yesterday against Lightfoot and Chicago Police Superintendent David Brown. The lawsuit seeks to force arbitration over the matter.

Chicago police officers have to report their vaccine status to an online portal. In case anyone is not vaccinated will be subject to twice-weekly testing.

Those who refuse to disclose their status will get a few days’ grace period to put forth their case, but in that scenario, they will have to go on unpaid leave and eventually be fired.

But Catanzara released videos in reply to this mandate and urged police officers to ignore the order and risk loss of pay.

Lightfoot responded by saying: “I cannot and will not stand idly by while the rhetoric of conspiracy theorists threatens the health and safety of Chicago’s residents and first responders.”

She also said that Catanzara was “encouraging a work stoppage or strike”, whereas both the state law and the union contract prohibits Chicago police from striking.

The police union responded with a tweet yesterday saying: “President John Catanzara has never engaged in, supported, or encouraged a work stoppage.”

“We’ve offered every resource, every public safety resource that’s available to the state to offer municipalities to the city of Chicago, so if the city calls us, we’ll respond,” Illinois Governor J.B. Pritzker said.

The 100 Season 8: Why The Producers Decided To End The Series?

Into The Badlands Season 4: Canceled By ABC! Why?

‘Shrek 5’: We Have Exciting Information About Release Date!

Frozen 3: Is There A Release Date Available?

Netflix Working On Series About Modern Greek and Roman Mythology |...

Manifest Season 4: What Will Come Next?